A TeamworkIQ task may optionally contain a form that lets assignees of the task submit information while performing the task. Such a form may optionally include File fields.

An attachment file is stored in an Amazon Web Services' S3 bucket. The file is not publicly accessible; it can only be accessed if a client uses a S3 Signed URI provided by TeamworkIQ.

The following diagram shows the interactions required to download an attached file. 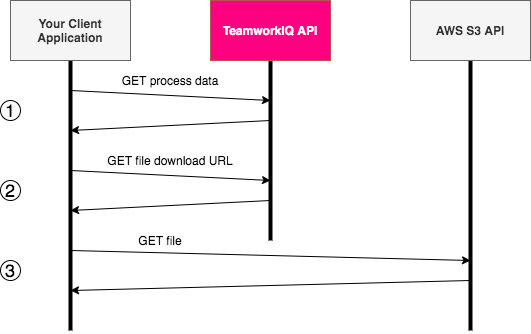 Steps 1 through 3 are as follows:

1. Fetch the process (or task) data

The client must first fetch the process (or task) data by sending a HTTPS GET request to the following URI:

The data value of a File field is a JSON array of FileInfo objects, each of which represents one file that has been uploaded via the File field. Each FileInfo object has the following properties:

Step 2. Fetch the File Download URI for one of the uploaded files

The client must send an HTTPS GET request to an Information Download URI that was returned in Step 1.

The response body is a JSON object that contains a dynamically generated download URI for the file:

The client must send an HTTPS GET request to the S3 "Signed URI" that was provided in Step 2. The S3 endpoint will return the file content.

The Security of your files

Attachment files are stored in an Amazon Web Services' S3 bucket. This bucket is NOT publicly accessible; your files can only be accessed using S3 "Signed URIs". To download your files directly from the bucket, your client application must send a GET request to a Signed URI.

The Signed URI expires after 15 minutes. This is because a Signed URI grants access to the file without requiring additional authentication. The 15-minute expiration ensures that if the owners of a process remove a participant's access to the process, the Signed URIs will quickly expire, and the user will no longer be able to access the files.

Every "Signed URI" is digitally signed to prevent tampering with its parameters. Attempts to change the timeout, the target file, etc. will fail.

TeamworkIQ only provides file download URIs to the following users:

A user who is not a participant in the process has NO access to the process's files.

Each file is "encrypted at rest". This means that it is encrypted before it is written to disk. In the unlikely event that someone were to steal a disk drive from the Amazon Web Services data center, your files are encrypted using the Advanced Encryption Standard with 256 bit key (AES-256) and would be effectively unreadable.

Files are backed up to other buckets outside in a different geographic region. Backup files are likewise encrypted.