This document describes the life cycle of a Task. It describes how the following Task properties change as the task moves through its life cycle:

At the most basic level, a task's status indicates the current state of the task:

The following figure depicts how a task's status may change over time. The solid lines in the figure are the transitions that a client may request for the task. The dotted lines are transitions that occur automatically when the client changes the status of a parent task or other ancestor. 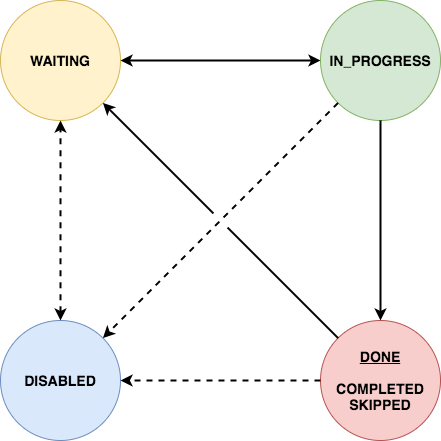 When a task is WAITING, the following status changes may occur:

When a task is IN_PROGRESS, the following status changes may occur:

When a task is DONE, the following status changes may occur:

When a task is DISABLED, the following status changes may occur:

Task status is the most visible sign of the task's state, but every task in a running process has a second, equally important, state property. This is the task's is_ready flag.

What does it mean for a task to be "ready to be started"?

When a list of tasks must be performed in sequence, Tasks 1 and 2 must usually be completed before you can perform Task 3. For example, you need to (1) open an account and (2) deposit money in it before you can (3) withdraw money from the account. Task 3 is "ready to be started" if all preceding tasks are DONE or DISABLED.

A task's is_ready flag is true if the task is "ready to be completed", and false otherwise.

What does "previous task" mean?

A Bulleted List like the following does not require any sequence; Tasks 1, 2 and 3 may be performed in any order, or in parallel:

Thus, Task 3's "previous tasks" do NOT include Task 1 or Task 2. Task 3 becomes ready as soon as the parent list starts.

is_ready has a number of effects:

What happens when a task auto-starts?

As a developer, do you need to understand is_ready?

If you are developing robots that perform certain automated tasks, your robots should activate when these tasks become actionable, which means that they are (1) ready and (2) either WAITING or IN_PROGRESS.